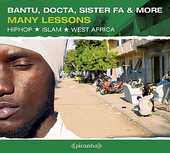 In Western Africa, hip-hop and Islam aren't at odds with one another. As the rap movement swept through Africa in the last few years, young rappers like Bantu, Docta, Sister Fa learned how to make Islam an aspect of their music, particularly in countries like Mali or Senegal that are heavily influenced by Muslim beliefs. Some combine devoutness with social criticism. Others criticise using religion to achieve political aims. The lessons are many and varied, here tought by Bantu, Docta, Sister Fa and many more.

For every song there is a different, original sound: there's a rich patchwork of ideas and influences that's pure pleasure to the ears. West African youth are, in general, serious about religion and it remains the one stable item on the daily Malian, Senegalese, Guinean or Nigerian agenda. Some of the tracks, such as the Senegalese Keur Gui's hard-toned Liye Raam', denounce the close relationship of religious leaders with the political ruling class; others, like Moroccan rappers MidNight Shems (pictured above) simply offer heartfelt invocations to Allah. For anyone who 's interested in knowing what's happening in contemporary music in this part of the world, or who wants an introduction to the hot topics of today's West Africa, this fresh and creative compilation is one that really needed to be made.

"This overview of current trends shows that younger artists are developing hip-hop forms that are much more African than the American models they borrow from."

Even tunes that rely on programmed beats rather than koras hint at ancient harmonies."

Piranha's excellent Many Lessons compilation, which documents the seamless merging of hip hop and Islam in West Africa, provides a reminder that combining music with a spiritual message doesn't have to be a recipe for disaster. The widespread popularity of hip hop in countries such as Senegal, Nigeria, Morocco, Guinea and Mali (artists from all five are featured here) isn't necessarily much of a surprise. After all, the potent combination of beats and rhymes is now prominent in just about every corner of the planet. What is less predictable is how successfully West African MCs have turned a genre normally associated with hollow materialism, big doe boasting and casual sexism into a vehicle of social commentary and, most crucially, offering plentiful thanks and praise for the almighty. On the other hand, religious topics have always ranked high in the subject matter of African musicians, including such internationally well-known figures as the late desert blues chief Ali Farka Toure and Youssun Dour, so perhaps it's to be expected the continent's MCs are equally unlikely to shy away from spiritual content.

Behind the counterfeit 50 Cent T-shirts and bootleg mixtapes piled high in market stalls in Western African cities like Dakar lies a thriving indigenous hip-hop culture, one that's inspired as much by the teachings of Mohammed as it is the rhymes of Jay-Z. For, if hip-hop is meant to tell the truth of everyday life, then it's natural that in countries such as Senegal and Mali where Islam is the dominant religion that rappers should reflect that in their rhymes. So in some ways, although the ideals of devout Islam seem to directly contradict the materialism espoused by those rappers flaunting their rides and riches across MTV, this Islamic hip-hop is much truer to the music's original spirit than almost anything we've heard on Def Jam recently.

In Western Africa, it seems hip-hop and Islam might not be so at odds with one another as one might suspect. In the last few years, as the rap movement swept through Africa, young rappers learned how to make Islam an integral part of their music, particularly in countries like Mali or Senegal that are heavily influenced by Muslim beliefs. Some artists combine devoutness with social criticism. Others criticize using religion to achieve political aims. The lessons are many and varied. 'Where in this world do Islam, American pop culture, youth culture and emancipation cross with the heritage of a culture conscious of its traditions? And what comes out of that? The answer is as simple as it is unlikely and is unfolding in these 14 stirring lessons,' says Tobias Maier Of Radio Multikulti of this 2008 release.