Billy Bragg - "Back To Basics" 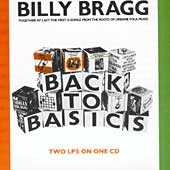 Billy Bragg is a British singer songwriter who first came to prominence in 1983 with his debut album, 'Life's a Riot '. Since then he has become one of the country's best known and best loved popular musicians. Dubbed Britain's finest rock poet by the British music paper, NME, Billy's high quality songwriting shuns the glossy values traditionally associated with pop music.---www.billybragg.co.uk----BACK TO BASIC - TWO LPS ON ONE CD - TOGETHER AT LAST THE FIRST 21 SONGS FROM THE ROOTS OF URBANE FOLK MUSIC.