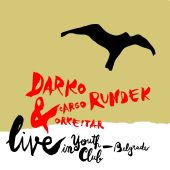 Darko Rundek, adventurer and cosmopolitan singer-songwriter-composer, was drawn from his home town Zagreb / Croatia to Paris during the civil war, where he gathered a new family around him: Cargo Orkestar. The French magazine Vibrations has called him a melange of d'Higelin, Gainsbourg, Bertrand Cantat and Bashung, the Daily Times put him in the category of post-modern troubadours like Tom Waits and Paulo Conte. This album was recorded live on March 24th 2007 in Belgrade, during the promotional tour for MHM A-HA OH YEAH DA-DA. It is peppered with songs from various periods of his work, arranged by Cargo. Live in Belgrade serves as the living proof that Darko Rundek, ex-frontman of the legendary new wave rock band Haustor in ex-Yugoslavia, still enjoys a dedicated crowd of fans in the Balkans. Though Rundek is not a great fan of live recordings, he could not but agree to the release of this album because it has captured such a special concert full of magic and brilliance. Experience the extraordinary world of Darko Rundek and his musical poetry together with the beautiful and virtuosic performance of his Cargo Orkestar in an outstanding live show that celebrates music from the Balkans, Central Europe and the Mediterranean area as well as reggae and even Latin American music.