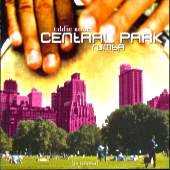 "On Sunday afternoons over the past 30 years, New York's Central Park has been the meeting place for celebrating NYC Rumba. Here, Nuyoricans (New York Puerto Ricans) and Afro-Cubans drum, sing and dance from early afternoon until late into the evening despite regular harassment by the authorities.

Central Park Rumba features the extraordinary drumming abilities of both Puerto Rican and Cuban musicians who reside in NYC. It has been put together by Eddie Bobè, a Nuyorican master percussionist, vocalist, composer, arranger and instructor, who has been an essential part of the Parque Central Rumba for many years. Also featured on this album are Orlando ""Puntilla"" Rios, an instrumental master of the Afro-Cuban religion of Santeria, Alberto Serrano who executes every style naturally and adds his own new musical perspective, Pedro Martinez, a young Cuban percussionist who has arrived recently in the U.S and Felix Sanabria, a Nuyorican master percussionist. With its special mix of Cuban and Nuyorican master musicians Central Park Rumba captures the uniqueness of New York's rumba scene which both unites it with and sets it apart from rumba in its original home of Cuba. Que siga la rumba! "