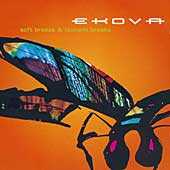 For those who are partial to gorgeous singing, promiscuously blended ethnic influences, and driving rhythms, there's just about nothing better than an Ekova album. Unless it's an Ekova remix album, on which you get to hear not only the wildly eclectic pastiche you're used to, but also the even more varied deconstructions of their music that ensue when a bunch of tracks are handed over to the leading lights of Europe's electronica scene. Soft Breeze and Tsunami Breaks is a remix collection based on the band's U.S. debut, Heaven's Dust, and it features contributions from such eminencies as DJ Cam (whose jazzy, scratch-heavy mix of 'Sebrendita' is the album's highlight track), Da Lata (who takes 'Starlight in Daden' straight back to Brazil), and Roudoudou, who turns the strongly Celtic-flavored 'Todoism' into dubwise reggae. The only weak track on the album is Doctor L's slightly monotonous remix of 'Chant of Diem.' Very highly recommended overall, as is the original album from which this material was taken. --- Rick Anderson, All Music Guide