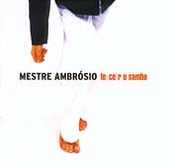 This is a group of "musicians' musicians" that has continually experimented with new sounds and new ways of expressing traditional forms, a band that has searched for original music that is deeply rooted in their heritage. Mestre Ambrósio's endless reservoir of energy and determination has made them an important influence and stimulus for new groups while their timbric coloring and original harmonic treatments has drawn established artists to go out of their way to hear and to record with them. Ambrósio's singular purpose-playing today's Pernambucan music-has sparked a tremendous increase of interest in traditional rhythms throughout Brazil and catapulted the band into the international spotlight. Among experts, Mestre Ambrósio is considered 'the band.'>>> www.brazzil.com/musjan99.htm