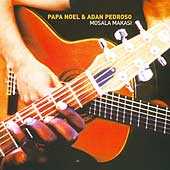 Over a long career Papa Noel has earnt great admiration and respect for his unique virtuoso style. From the 50s to the 80s he played with many of the great names of Gongalese rumba. He began his solo career in the 80s.From the new generation of Cuban singer-songwriters, Adan Pedroso is a promising young talent. Growing up in Havana he listened to la Nueva Trova, the popular songwriting movement, which came to the fore from the 60s through the to the 80s. Later he bacame interested in traditional music and formed the band Asere to play sones, guarachas and changui.