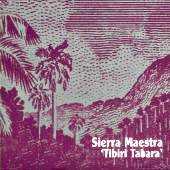 Sierra Maestra have been stars of Cuban music ever since the late '70s. They were the first group, and remain the best, of the modern era to play in the old-style son line-up: tres, guitar, trumpet, bongo, güiro and vocals - as during the great days of the 1920s and '30s. They have been the pioneers in reviving this style for new generations and reintroducing it into the Cuban mainstream. They named themselves after the mountain range in the eastern part of Cuba as a tribute to the birthplace of son. www.sierra-maestra.net