Sister Fa - "Sarabah - Tales from the Flipside of Paradise" 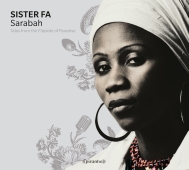 Sarabah - Tales from the Flipside of Paradise

Sister Fa entered this world in the early 80s in Dakar, the vibrating capital of Senegal. Nourished on the energy and creativity of West Africa's Hip Hop metropolis, Sister Fa injectes these into her own music with inimitable artistic expression. Rich musical and cultural traditions from her native country have significantly influenced her artistic output, lending it a uniquely personal note. Her lyrics examine social, political and personal subjects, but Sister Fa uses her music above all for her fight against the tradition of female genital mutilation. Sister Fa is the best-known female rapper in Senegal and a role model for many young women. With a new homebase in Berlin, Sister Fa is ready to share her tales from the flipside of paradise with the rest of the world.

"From the standpoint of social awareness, Sister Fa makes mincemeat of posturing rock stars. [...] Listen to her second solo record and prepare to reel in awe. [...] Sister Fa sounds unlike anything else you've ever heard." Morning Star, June 15, 2009

Buy now: "Sister Fa "Saraba-Tales from the Flipside of Paradise"