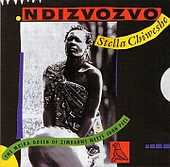 "When I first heard the Sound of the mbira, I wanted to hear more of it everyday. I got sick and tired of making trips in search of mbira players to play for me to such an extend it caused me to learn the mbira so that i could play for myself. There were no mbira players in Masembura near Bindura where i lived". Stella Rimbisai Chiweshe Born 1946 in Mujumhi, a village in Mhondoro Zimbabwe, the woman now known by her people as Ambuya Chinyakare (Grandmother of Traditional Music) has had to struggle hard every step of the way to becoming her true self, the Queen of Mbira. The colonial power, Britain, had banned the mbira. The Church told her that it was the work of the Devil and even her own people told her that it was taboo, an instrument that a woman could never play. Yet by the mid-sixties, she had become recognised as a gifted maridzambira(mbiraplayer), playing at healing ceremonies, funerals, concerts and important parties and her debut single, "Kasahwa", had gone gold. After Zimbabwean independence in 1980, she was asked to join the National Dance Company (NDC) and toured throughout Zimbabwe, Mozambique, Australia, India, China, Korea and Europe. She left tue NDC in 1985 when requests for her to play solo had expanded. From 1987 she has been on a continual tour of Europe, North America, England, Canada, Sweden, Finland, Denmark, Italy, Serbia, The Czeck Republic, Slovenia, Kroatia, New Zealand to name a few. So far she has recorded 22 local singles and 7 international Albums. She become the first Zimbabwean female mbira player to gain international recognition, been awarded an MA from Harare University in 2003, won two ZIMA Awards in 2005 and healed countless troubled souls.