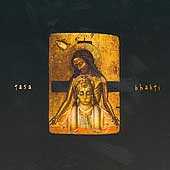 Toronto-based world music ensemble Tasa celebrate the release of their debut CD entitled Bhakti. The title Bhakti means Devotion and that is precisely what the musicians of Tasa give in their performances on this amazing work that merges music, mind, and spirit of east and west together in a fresh and understanding way. The nine tracks of original instrumental music featured onBhakti ranges from the upbeat and funky to the sublime. Tasa's music is based on the ancient Raga and Tala system from India and diverges into several other genres of world music including Brazilian, Arabic, and Jazz. The CD is filled with intricate rhythms and beautiful Indian melodies. Each composition provides a distinctive environment for extended improvisation. The album moves from groove-oriented pieces such as Akbar's Jewel to etheric ballads such as Anamayakosha. (www.chocolaterecords.com/spectrum.html)