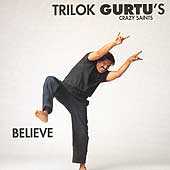 No musician has done more than Trilok Gurtu to blend the subtleties of Eastern and Western music to create something original, dynamic and compelling. Born and raised in a prominent musical Bombay family (his mother Shabha is a celebrated vocalist, and his grandfather a concert sitar player), Gurtu's grounding in the involved rhythmic rules and structures of Indian classical music began formally at the age of five with tuition in tabla, the demanding but uniquely eloquent percussion instrument that provides the pulse for the Indian musical tradition. Perhaps if he had been born a generation earlier he would have remained on that particular distinguished path but he was soon seduced, along with the rest of the world's teenage population at that time, by the rock and soul sounds of Jimi Hendrix, James Brown and the Supremes, and then subsequently by the gradually augmented by all manner of kit drums and percussion as he gained a reputation experimenting in the urgeoning Indian pop and jazz scenes. (www.ejn.it/mus/gurtu.htm) Awarded Best Percussionist in DownBeat's critics poll for 1994, 1995,1996, 2000 and 2001. (http://perso.wanadoo.fr/shortcut/eng_index.htm)