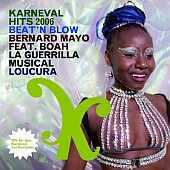 More than 70 songs were sent to the first music competition ofKarneval der Kulturen - they speak for the positive response to this initiative of Karneval der Kulturen and Piranha Musik.
Having existed over 10 years now, Karneval der Kulturen has become a symbol for Berlin's cultural diversity and is well known even beyond Berlin. And it is this colourfulness and diversity that is represented in the musical sprectrum of the music that was sent to the competition: from the classical instrumental to the purely electronic track - in the middle loads of Reggae, Funk, Salsa and Samba. The majority of the titles was produced exclusively for this music competition and their lyrics are about Karnevals der Kulturen.
The final choice was made by four Berlin music experts: Bettina Schasse de Araujo (Piranha Musik), Johannes Paetzold (RadioEins) and Johannes Theurer (Radio Multikulti).