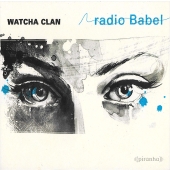 The biblical city of Babel and its infamous tower have received bad press over the centuries. Imagined as a looming structure built by children in which all residents spoke the same language, the omnipresent God decided to trick humans in order to make them scatter the word Babel is derived from the Hebrew balal, to "jumble." Yet if we consider the tower as a prototype radio transmitter radio Babel, as Marseille, France-based Watcha Clan does on its latest album, Radio Babel (Piranha), the sound of one world singing and dancing together makes perfect sense. "We want to be understood by everyone," says the charismatic vocalist Sista K. "Singing in different languages is the first step in cultural integration, especially expressing the message in English, the international language. Maybe that's not what people expect from world music,' but what is essential is to understand each other. With Radio Babel the message goes with the music, and also with the words. Music has the power to pass through any border." Finding an international fanbase with 2008's Diaspora Hi-Fi, the following year's Diaspora Remixed included remixes by newfound friends across the planet, creating an even broader sound which is found in the new recording. Watcha Clan has always exhibited a visionary spiritual eclecticism in its sound, stretching from Gnawa trance and drum n bass to hip-hop, Balkan brass and Sephardic folk, with thriving bass-heavy pulsations countered by Sista K's show-stopping vocals. On Radio Babel, the electronics have taken a slight backseat to more mature and fuller songwriting. Kouti and K's harmonizing on the Tuareg-drenched "Hasnaduro" is yet another example of cultural convergence. Pulling from the great surge in Malian desert music via Tinariwen and Toumast, Watcha Clan injects a hearty dose of electric guitars, ululations and North African percussion, including the low register of the bass-like gumbri, into this throbbing dance song. Perhaps the most inventive song, however, is the band's take on the 17th century Hebrew poem by Rabbi Shalom Shabazi, "Im Nin'alu," most famously covered by Israeli great Ofra Haza. Derek Beres (NYC)