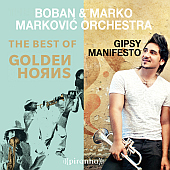 Growing from balkan to world champions, Boban and Marko release their Gipsy Manifesto, a musical call for change and a sonic striving for higher truth, drafted and crafted in the school of life. Ancient melodies that have worked their way down the silk road to the beaches of the Adriatic Sea, played on the instruments of 19th-century Czech Military Bands against the throbbing rhythms that have driven the wild dances of innumerable generations worth of Roma celebrations - this is Balkan Brass Band music. The saturation of multicultural elements that has created this music, though, is far from a completed process. In the hands of Boban and Marko Markovic, the evolution is ongoing. These musical visionaries, a virtuosic father and his prodigious son, are active reinterpreters of this hallowed tradition. Their brand of Brass Band music is contemporary and big-city ready, while staying well rooted in the rural traditions that made it. The aesthetic of the band draws ready comparisons to horn-drenched funk music, New Orleans brass band ensembles, and classic Jamaican ska, but the rhythms and the melodies: these are distinctly Balkan. "Covek i Truba" is a snapshot of the current moment in this evolution. The songs are bold and bombastic, and feature the traditional slate of horns and marching drums as well as the new addition of guitar and drumset. The resulting sound is decidedly contemporary, and the album is filled with potential dance-party anthems, from the opening track "Turbo Dizel," a fast-paced piece with a breakneck rhythm and a driving vocal line to the loping, melodic "Fanferica Smekerica" ("Funk Girl"). The title track (in reverse) "Truba i Covek" is a slow, sensual, and jazzy instrumental track, and "Balkan Caravan" has a kicked back Latin-esque rhythm but a decidedly Balkan hook, and the closing track, "Bobanova Saga," brings the album to a slithering, strutting close with hints of improvisation that add another layer of texture to these stunning arrangements. "Having dominated the Balkan brass world in the 20th century, Boban and Marko have now chosen to do no less than redefine the genre. There isnt a band on the planet that can touch them." Frank London

"Boban i Marko Markovic' 'Golden Horn' album is a boisterous best-of selection gleaned from their physical & digital sales, YouTube views, radioplays, synch & other licensing hits. Without doubt it's an essential part of my repertoire for BalkanBeats dance floors worldwide." DJ Robert Soko "Imgagine the rowdiest, fastest rendition of 'Hava Nagila' you've ever heard, zip it up with wild brass playing that would make a New Orleans marching band stop and stare, and throw in percussion so thunderous it shakes a hall, and then you've got an idea why the Orkestar gets a crowd into a frenzy." Boston Herald True or not, one thing is clear: Boban Markovic and his son and prized protégé Marko Markovic are the bomb in Balkan brass dance music, harnessing the absolute flexibility of Miles Davis and the cool funk of Herb Alpert in the ultimate expression of their Southern Serbian Rroma roots. This compilation unites their best tracks selected by balkanbeats expert and innovator DJ Robert Soko of Balkanbeats fame. This selection portraits the unique story of a musical family and the outstanding relation between Father Boban and Son Marko, between legendary Serbian tradition and exciting future of Balkan Brass music. Boban's decades of experience are now fired by Marko's youthful vibe-an energy sustained by marathon practice sessions and a lifetime spent with dad on stage.