Boris Kovac - "Before and after... Apocalypse (DVD with 2 music films)" 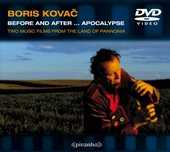 Before and after... Apocalypse (DVD with 2 music films)

Boris Kovac's "Last Balkan Tango" performance - staged over 100 times worldwide - creates an atmosphere of the party before the apocalypse, whereas his second film, an imaginary sentimental journey into the "World after History", evokes a post-apocalypse atmosphere. However you perceive this DVD: as a unique transmission of sounds into pictures, a chance to share his theatrical live work in perfect Surround Sound or a new way to do a "Best of ..." album, you cannot escape the mesmerising presence of this outstanding artist from the TransBalkan highway.

Press Quotes on Boris Kovac "Before and After History"
"In these times of "Balkan Pop" and "Russian Disko", electrified polka and sentimental gypsy blues spring to mind far tos quickly when talking about music(ians) from southeastern Europe. Thus artists like Boris Kovac are easily overlooked. His artificial treatment of the balkan tradition doesn't rely on cheap club-beats, but takes (...) on the the esthetics and the world outlook of an Emir Kustoriza and combines (...) the Variété-like style of the Tiger Lillies with jazz improvisations and modern dance. Both films on this DVD captivate by their interplay of (post)apocalyptic melancholy and a tradition-conscious lust for life."
WESTZEIT, June 2008

"With his last three CDs (The Last Balkan Tango, Ballads at the End of Time, World After History) Boris Kovac, a charismatic musician from Vojvodina, the area between Serbia and Hungary, has created a very special kind of music (...) focusing on an introverted, movingly melancholy sound spectrum between mediterranean tango, k.u.k.-dance salon, mystic waltzes and balkan rumba, strongly marked by the aftermath of the last balkan war, which haunts all his musical figures like an apocalyptic trauma. It's a mixture of dionysian inebriation, nostalgia and exhilarating balkan folklore. His concerts take the audience to another world, a musical travelling circus full of longing enthusiasm oscillating between jazz and folk. All is now made visible on this DVD, two music films which take us optically into Boris Kovac's world. (...) A visual experience that is far more than a simple live concert recording."
www.sound-and-image.de, June 2008

Now available: "Before and After...Apocalypse" by Boris Kovac