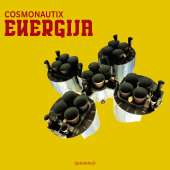 "Energija" is the name of the debut record from Berlin based band Cosmonautix who bring outer space to the dancefloor with their Russian Balalaika Speedfolk. Jurij Gagarin would be proud. Initiative Musik approves as well and officially supports the young musicians. For the proper Serbian balalaika-speedfolk-groove the band has added their special rocketjuice in the studio and, as a surprise, they invited singer Shura Lipovsky from the Netherlands into their spaceship to sing with them on the jiddish song "Rabejnu Tam". The album "Energija" brings you 12 carefully arranged songs from the folk and polka tradition of Eastern Europe, seasoned with the best parts of Ska and Punk.

This debut album "Energija" by the Cosmonautix is here available!