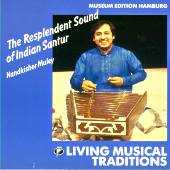 The Resplendent Sound of Indian Santur

The santur is a stringed instrument which spread from the Arabic-Persian culture area as far as southern and eastern Asia, as well as westwards throughout the European continent. The santur is a box zither of trapezoidal shape which has, like a hammer ducimer, metal strings, these are struck with a pair of curved clappers made from a hardwood tree. The instrument heard on this recording has 87 strings, which play 29 different pitches ranging over almost two-and-a-half octaves.