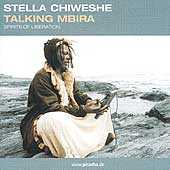 The Mbira Queen of Zimbabwe not only introduced the combination of mbira and marimba into the modern Zimbabwe soundscape, but she is the only woman in her home country to lead her own band. Stella took a leading role in the formation of the Zimbabwe Musicians Union, and since 1993 she is director of the Mother Earth Trust - Network of Female Aritsts in Zimbabwe. MBIRA - the spiritual instrument of Zimbabwe has been used for religious and entertainment puposes for hundreds of years. The sound is produced from rows of iron keys, flattened at the playing end, attached to a wooden board and then fixed into a calabash for resonance. It is often placed inside a large gourd for further amplification.

"Imagine a sound somewhere between that of a steel band and a finger trailing the spokes of a slowly spinning bicycle wheel. Amplify. That's the mbira or thumb piano, in Zimbabwe the most important traditional instrument. Steel metal is beaten into flattened keys and attached to a wooden framework with or without an additional circular resonator. Chiweshe is an innovator in what was previously a male-dominated genre and has taken it into the context of modern Zimbabwe pop...(Rouge)