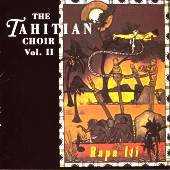 TANGI MAHATE' - e.g. A traditional song filled with double entendré lyrics, Tangi mahate could be considered equivalent to the rap music of today. The song speaks of the Rouroohia, a variety of banana native to Rapa. The people enjoy and appreciate this banana because it is so big. There is a lot of laughter, giggles and joking when they sing this song. This music is as primitive and severe to our ears as the early Flemish paintings are to our eyes. Structurally, each grup of voices is responsible for its own melody. As there can be up to sixteen groups, an extraordinarily complex web of voices is developed. The study of such harmony, its action and reaction, is a fascinating one in spite of its difficulty. The people of Rapa have kept their musical roots untouched since the night of time.